For the first time ever we will have a red white and blue sprinkled limited LP edition, reflecting the colors of the original „american“ JUNGLE artwork on the LP cover which was the original logo for the cover art back in 1969!!! The records will be here in late june 2011, both, the normal and the color version will be housed in a deluxe gatefold sleeve with unseen pictures and full band history . This is a one-time pressing in full collaboration with the band members, so be quick.  More info about this record in our shop at shop.redloungerecords.com!

GG KING – TWO TRACK PARTY PACK 7″ out now!
Classic single with two songs, „Day turns into night“ is a final CARBONAS song that never got recorded/released. „Drug induced state“ is a RALPHS cover, with an organ that will give Digital Leather a run for their money! Very excited about this one…we are excited about all our releases, rest asure but…. Greg used to off course sing for the almighty Carbonas, who are for one reason or another absent without leave!

LOVER! – REVERSE THE CURSE LP/CD out now!
Rich Crook isn’t one to dwell in the past! Even so he easily could. Being a former member of such amazing bands as the Reatards, Lost Sounds and Knaughty Knights ( just to name a few) he could have made the same record over and over again and still beat most people at their game. But he decided not to. While all other LOVER! Records where mostly recorded and performed all by Rich himself, this album is a full fledged band recording. While most guys that decide to record all by themselves do this for

the reason to make sure everything is done 100% their way, like Jay Reatard used to and for the record Erkin Koray does to this day, Rich took the rare step and put his trust again in fellow musicians. The cover makes sure you get the message quick: Master Crook and his dark deciples cooking up an evil stew consisting of the past Lover! Records saying : REVERSE THE CURSE. And what deciples they are:

So what is the music like?? A bit more pop sometimes with hints of early 90ties British Indie (Caught). A bit more 60ties which mainly hits you in form of a great added organ and some amazing wild Garage Fuzz Guitars which sometimes even have a Chocolate Watchband Flavour ( Do I Really) Some real forward Garage stuff (Injured and Useless) But what ever it is…is done the unmistakenable LOVER! Style.

LOVER! – LOST IN THE SHUFFLE – THE SINGLES COLLECTION LP/CD
No suprise, this is a collection of the gazillions of singles he did in the past years… 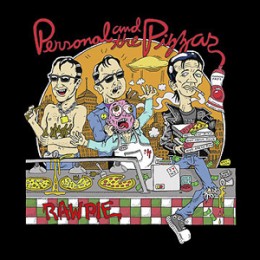 From New Jersey, these part-time workers of a well known Pizza Joint, made it to the world press. Just for fun, the recorded a couple of singles which all became huge hits and are constantly sold out everywhere. They toured even the West Coast. They really like pizza and cheap beer. They actually do not really know how to play their instruments. They only know three bands, RAMONES, THE STOOGES and THE DICTATORS. And they know how to look handsome! So here it is, the first full lenght record from PERSONAL AND THE PIZZAS, new recordings of all their massive hits, great artwork by Ben Lyon and as if this is not enough, you also get a ABSOLUTELY FREE PERSONAL AND THE PIZZAS SIGNATURE POCKET COMB. Classy!

GO TO OUR NEW SHOP TO ORDER THIS RECORD!